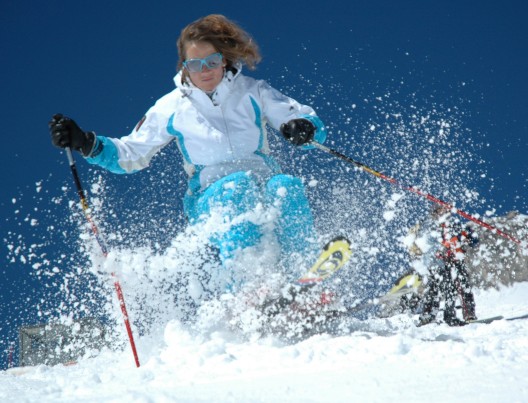 ..And The Lord Said “Let There Be Bumps”

Having completed the Snoworks Bumps Course a few weeks’ ago I would like to share my thoughts as to why I found it so useful in my quest to become an all mountain skier. The first thing I would like to say is that for anyone wishing to improve their overall skiing this course is surely a must because learning to ski bumps encapsulates all of the elements required to ski ANY part of the mountain. Phil our instructor talked about the ‘journey’ in skiing bumps and how important it is to respect where you are in your personal journey otherwise learning will not take place. He pointed out that if your bump skiing is currently at an intermediate level and you try to ski the same line and at the same speed as a world cup bump skier then disaster is bound to follow. The course demonstrated that whatever your level there are many different lines and tactics you can use in order to ski in control rather than ‘just get down’. The course firstly recognised where the individuals of the group were in their journey and then focused on the skills that lead to progression such as: – speed and direction control, including moving snow, skidding, slipping, appropriate use of the edges, turning/twisting the legs and feet, pressure control and picking and keeping to a line of travel; plus dynamic balance including awareness, absorption and anticipation; and very importantly one’s emotions. 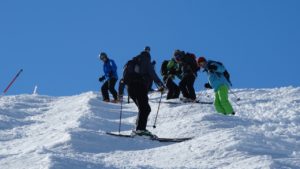 Preparing the ‘rutline’ in Tignes.

In previous bumps lessons that I have encountered it was the usual retract the legs to absorb the bump, initiate the turn on top of the bump and then extend legs into the trough but I don’t recall any mention of controlling speed by skidding whilst extending the legs. In any case, when given those instructions many people, including myself, become so focused on retracting and extending the legs other things fall by the wayside. However, it has now become apparent that when learning the bumps there is no real need to absorb the bumps because you are not travelling fast enough.  On the Snoworks course Phil placed most of the emphasis on speed control and didn’t mention retraction and extension until the last day when some of the group where skiing fast enough to make it beneficial but even then it was spoken about in terms of allowing it to develop rather forcing it.

One of the fundamental drills used by Phil was the creation of a rut line. For anyone not sure what a rut line is, it is basically the building of your own bumps run whereby each member of the group followed exactly the same line as Phil and then skied it repeatedly causing the ruts to get deeper and hence the bumps to become bigger. The brilliant thing about this drill is it brings about the most natural progression possible because when you ski it at first it is relatively easy but each time you ski it again it becomes more challenging and so causing you to adapt and learn in a controlled fashion. 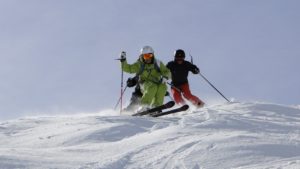 Lee Townend, Snoworks instructor in a ‘rutline’ with guests on the Tignes glacier.

The day before the Bumps Course started I tried to ski in a rut line created by some expert bumps skiers and I skied it like a Nairobi Water Buffalo and was spat out of the rut line over and over again and took some heavy hits. Knowing that the impending Bumps Course was going to use rut lines I feared for the worst and so thought that if by the end of the course I could make just 4 turns in the ruts I would be happy. As it turned out I learnt that I had been trying to ski a rut line way ahead in my personal journey whilst having little idea of how to deal with it, particularly speed control. Indeed, by the end of the Snoworks course I made quite a few descents in our self created rut line which included many more turns than just 4 and most of the time without being spat out. So I came to love the rut line and now see it as one of the best ski learning aids ever.

Skiing in the rut line was interspersed with various naturally formed bump runs on different parts of Espace Killy with the emphasis on speed control and thereby skidding and sliding. One of the things I found very interesting and useful was that for the first time I could see a “rut line” in the real bumps. 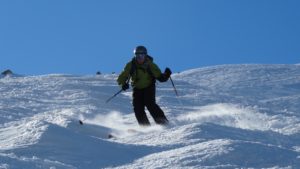 Am I now a good bump skier? No certainly not and I still have quite a way to go however I am sure that I have moved significantly further in my personal journey and now actually believe that I am going to get there.

Phil told me that Snoworks hasn’t run more Bumps Courses because there is often insufficient uptake. This is interesting because before the course started I told a few skiers that I was doing bumps for the week and a number of them said they wouldn’t do it because it would be too tiring, but I can assure anyone that in reality this wasn’t the case at all. I understand that Snoworks is thinking of running more Bumps Courses in 2013/14 and for anyone reading this I would certainly recommend you give it serious consideration; I certainly will be doing at least two more.

In closing, I would like to reiterate that for anyone wishing to improve their skiing, whether on piste, off piste, difficult snow conditions, deep snow, narrow couloirs and of course the bumps then this course can be hugely beneficial. And obviously if you aspire to being an all mountain skier then you are never going to get there if you can’t ski the bumps!

Steve Prince  formerly worked as General Manager at Beckton Alps Ski Centre in London and also spent a full season in Andorra. He now spends his winters enjoying his skiing and working on his own development.