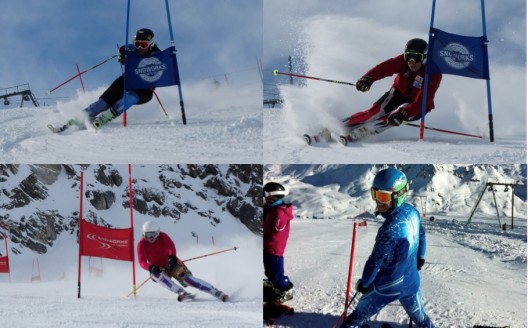 2015 was quite a year for the Snoworks Eurotesters. For those not familiar with the eurotest it’s one of the final exams for ski instructors wanting to gain their top level instructor award in Austria, Germany, France, Italy and the UK. A successful pass at the eurotest along with the other modules; teaching, coaching and off-piste safety ensures recognition throughout Europe. It’s a test of the instructors own personal performance requiring technical precision, physical fitness, focus and the ability to perform under stress. A high performance is required to achieve a pass.

TORI COLLINS
I trained with Snoworks for 2 summers and 3 autumn seasons and passed my Eurotest in Solda, Italy with 1 second to spare! It was one of the happiest days of my life. Everything so far had led me to this goal and I could not have achieved this without the help and support of the Snoworks coaches, Emma Carrick-Anderson, herself a four time Olympian and Mike Barker, former national team coach who also accompanied me to the race to help relieve stress so I could concentrate 100% on my race.

As customary for successful eurotesters I celebrated in style with a big party, bottles of champagne and of course the tradition of wearing my speed suit!

ROBIN BRYCE
Robin became super fit in order to pass the eurotest. His dedication throughout the summer and autumn led him to pass the first eurotest of the 2014/15 season in Italy.

“Snoworks put together a tight supportive training group perfectly pitched with personalised coaching. With a cap on maximum numbers per group we were able to have a quick turn around at the top of the course ensuring maximum time in the gates. On-snow and off-snow training was intelligently structured around your seasons goals. All I needed to bring was my own A game”

Not coming through the racing background as a kid meant that Robin trained hard for a number of seasons to achieve his goal. Robin also celebrated big with a night out in Tignes in his speed suit.

ISLA MARSH
Isla earned the nickname ‘The Bomber’ whilst eurotest training with Snoworks. Her gutsy style and balls of steel got her the eurotest pass she deserved in Sestola last season.

Isla started her skiing career on a Snoworks level 1 and 2 Gap course.

“Snoworks policy of running a maximum of 2 groups on the eurotest programme meant our coaches got to know us really well. We were not lost in large numbers. Emma and Mikey’s ace coaching meant that when I rocked up for the eurotest itself it felt like just another fun day skiing gates. The result took care of itself”

Isla celebrated her pass with a big night out with friends in Morzine.

The eurotest was Mikey’s last module to complete his full ski teaching diploma, the ISTD. He trained solidly and eventually the training paid off as he showed the eurotest who’s boss at the end of the season.

Celebrations followed with a beer or two while friends presented him with a kings crown and a gold medal to wear for the evening.

Tori Collins is based in Tignes where she’s been working through her final ski teaching exams. You can follow Tori on Tignes Tori where she posts regular news updates about Tignes along with the latest snow conditions.