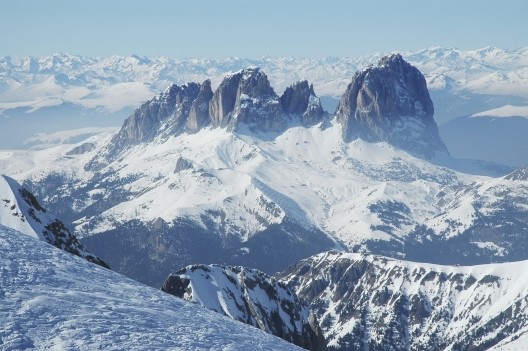 New in 2016 we introduced the Snoworks Sella Ronda Backcountry. Staying in the lively town of Corvara with direct access into this magnificent ski area in the heart of the Dolomites. The Dolomiti Superski area has an incredible 450 lifts serving 1,220km of marked runs, the largest ski circus in the world. The mountains are beautiful, dominated by towering cliffs; a distinct feature of the Dolomites.

The Sella Ronda is the ski circuit around the Sella group. The Sella massif lies between the four Ladin valleys of Badia. Gherdeina, Fascia and Fodom and is divided between the provinces of South Tyrol, Trentino and Belluno.

History
As early as in the second half of the 18th century, a number of young men from Corvara accompanied the first hikers on their way to the Dolomites’ peaks. These visitors were mostly natural scientists and geologists from Great Britain who were interested in the Dolomites’ unique nature. During the 1930s, Val Badia valley’s first skiing school was founded in Corvara and in 1938 the first lift system to the Col Alto was built. This sledge lift from 1938 was followed by Italy’s first chair lift, the Col Alto chair lift which was erected in 1947. This marked the start of the skiing era in Alta Badia.

In winter, Corvara is optimally equipped with a network of modern lifts. Skiers can tackle challenging runs such as the Vallon-Boè 4.5 km and the Col Alt and can make use of the entrance to two of the most beautiful skiing tours in the Alps, the ‘Sella Ronda’ and the ‘1st World War ski tour’.

It’s a week of off piste skiing with Snoworks instructors and guides. Three groups with 18 skiers maximum, open to level 4+ to 6 skiers.

“This course had been on my wish list ever since I rode the Maratona les Dolomites road bike sportive in 2012. A beautiful mountain range with so much to offer both in summer and winter. The Sella Ronda is a must-ski for all those who love winter sports. The experience skiing off piste in this stunning region is magnificent and the scenery stunning. Did it live up to my expectations? Without a doubt”
Lee Townend Snoworks instructor