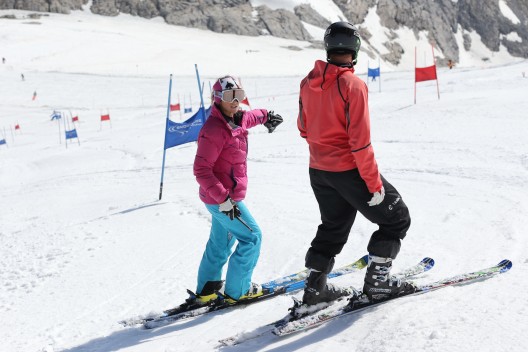 Racing And The ‘Open’ Environment

Emma Carrick-Anderson, Director of Snoworks Race Camps, Eurotest, Test Technique training and 4 time Olympic ski racer discusses one of the reasons why many racers may not be reaching their full potential. Photo: Emma coaching on the Tignes Glacier. Taken by Polly Baldwin Dynamic Pictures.

When you watch Ted Ligety, Lindsey Vonn, Bode Miller and all the top World cup racers they all have many things in common and it goes without saying they are all incredible skiers and ski racers. Having been an Olympic skier myself I know just how many hours these top skiers have dedicated to their sport. What sets these skiers aside from the thousands of others who have also dedicated hours to their training but who haven’t quite made it to the pinnacle of their chosen sport?  There can be many reasons that stop skiers reaching their full potential but unfortunately one of these reasons is an incredibly frustrating one.

Take Ligety and watch one of his incredible Giant Slalom blitzing runs. Watch it in normal speed and in slow motion and you will notice that no 2 turns are alike! He will carve one turn, stivot the next (a blend of pivoting the skis and skidding to allow him to cut off the top of the turn and engage the edge at precisely the right moment), go airborne and land on the inside ski, then go airborne and land on the outside ski, he may then drop his hand onto the snow, be thrown forwards, then be thrown backwards and the list goes on and on.

Sports can be divided into ‘Open’ and ‘Closed’. A ‘Closed’ sport is one where the environment doesn’t change for example lane swimming, 100m sprint, javelin throwing. Then there are the ‘Open’ sports of which skiing is one, also rugby, tennis, football etc. In ‘Open’ sports, the environment is constantly changing and the athlete has to react constantly to what is thrown at him/her.

Watch Ligety’s run and many will often pick up on how far forwards his hands are or how he projects himself forward into the new turn, how his hips rise between turns, how he so called angulates as he moves from one turn to the next and the list goes on. The list I’ve just mentioned are all movement descriptions. These are all things that are happening as Ligety reacts to the changes in the course or conditions. They are not movements he is consciously thinking about making.

Numerous times I’ve been frustrated as I’ve watched a young skier ski down a GS or Slalom course and thought to myself how naturally they were skiing only to hear the coach say ‘hands forward’ or ‘get forward’. This is an instruction which may actually block the skier as they become so focused on this one aspect that they can no longer adjust naturally to what the course and terrain throws at them. As you ski down a course, the rhythm and terrain will constantly change so a ‘Closed’ instruction may hold you back. For example, if you are constantly trying to go forward and then hit a compression, it’s game over.

Of course there are times when we must train ‘Closed’ and this is an important time to build fundamentals of good skiing. We often do this first thing in the morning as part of our warm up routine or in the summer months on the glaciers when the pressure of competition is a long way off. Think of a footballer during a training session when he is working on a particular area of the game say dribbling through cones to develop control of the ball, working on passing or tackling then think of that same footballer going out and playing their match. During the match he is constantly reacting to what is happening in the game and is drawing on the hours of skill development he has done but is not thinking about what movement he is making. There is most definitely a time for developing various skills and movements in skiing but this should be done out of the gates or in a training environment rather than a competition environment.

Coaching in an ‘Open’ environment allows the skier to develop more naturally as they constantly adjust their movements to match the terrain. If we encourage skiers to focus on a particular movement whilst they are in an ‘Open’ environment (demanding training course or competition) we may hold them back as they are no longer able to react to the ruts, change in conditions or rhythm change in the course.

How many thousands of hours do you think top ski racers like Miller free skied? They free skied through trees, in powder, in crud, in slush, on ice and through this developed a very natural way of coping with all conditions. Then they started to ski gates on all different surfaces and the transition from free skiing to gate skiing was very easy as they continued to ‘feel’ and adjust. Imagine a 40 gate Giant Slalom and a racer who is losing grip very slightly so the ski drifts outwards losing the skier 0.10seconds per gate. This stacks up to a whacking 4 seconds over the whole course! Imagine another racer who can feel every time his/her ski breaks away sideways and can adjust instantly!

Great racers are great skiers and they become great skiers by free skiing, masses!  To those racers out there please free ski and develop your own style. Don’t become blocked by obsessing with balancing with your upper body, why not balance with your feet? Don’t overcomplicate things by trying to think of moving your hips around, allow them to move naturally by moving your feet. Don’t over think big angulation, rather develop such control with your edges that angulation happens naturally.

And to those coaches (and there are many great coaches) please encourage your athletes to move freely. Lets develop skillful skiers who are able to be free, athletic, dynamic, agile and a thousand more words which will help develop champions who love this sport rather than static robots trying to fit into a mould.

Emma Carrick-Anderson along with Mike Barker former National Team coach, will be running Race Camps, Eurotest Training and Test Technique training in the summer and autumn in Tignes where you can train to be an ‘Open’ ski racer. Click for details.