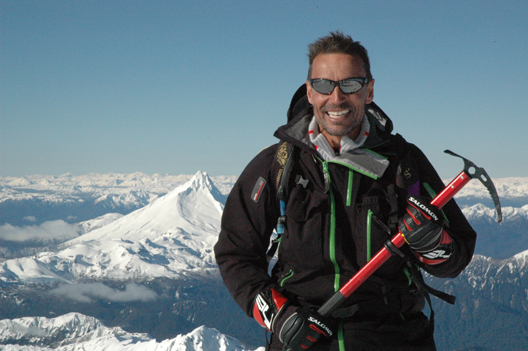 Skiing The Pacific Ring Of Fire

If someone had said to me I would be standing on the top of a live Volcano looking down into the centre of the earth with bubbling lava one minute and then skiing off piste in perfect snow the next I would have thought they were crazy. Yet here I was doing exactly that. Chile is a country of startling contrasts which on average is over 2,700 miles long, the equivalent distance from Edinburgh to Baghdad and never more then 150 miles wide with some of the most active volcanoes in the world.

I first started my adventures in Chile six years ago when I was lucky to meet a good friend of mine Cristian Levy. Cristian runs his own Chilean tourism agency based in Temuco in the centre of the Lakes and Volcano district. I was familiar with Valle Nevado and Portillo the main Chilean ski destinations but Cristian persuaded me there is a totally different side to skiing in Chile. Antuco, Corralco, Araucarias, Pucon, Huilo Huilo, Antillanca and Osorno are ski areas very few skiers have ever heard about so when I took my first group there 6 years ago needless to say I was pretty apprehensive. We’re used to The 3 Valleys and the Espace Killy with hundreds of ski lifts stretching in every direction. Here we were travelling half way around the world to ski in resorts with only one or two ski lifts! You have to be joking I thought. Nervous was an understatement. I had persuaded some of my guests to take three weeks off work and part with a fare chunk of their income to ski in a resort with two lifts! What’s the point heading half way across the world to ski in somewhere exactly the same as our own back door, I kept saying to myself. My worries were totally unfounded, this was a totally different type of ski experience. The scenery spectacular, the hospitality overwhelming, the skiing totally different and the opportunity to ski from the top of live volcanoes! Chile had me hooked.

Every year we have added to and amended the itinerary and shaped it into the ultimate Chilean skiing experience designed for skiers from limited or no off piste experience to off piste experts. But each year as I travelled around the lure of the volcanoes was overwhelming. I had always managed to get to the top of one or two within our itinerary but volcano skiing is addictive and I wanted more! So I sat down with Cristian and Guido our local Guide and drew up the ultimate volcano itinerary. Climb and ski off the top of 7 Volcanoes in 12 days!

So here were ‘The 7 Volcanoes’. Lonquimay, Llaima, Villarrica, Mocho, Choshuenco, Casablanca and Osorno.

In September I persuaded a few more clients to bring their touring skis take a couple of weeks off work and part with some more of their hard earned cash. Some had little or no experience and some were hardened ski tourers.

If you think one volcano is the same as another, think again. Every one is different. Different shapes, different scenery, different summits and different history. Lonquimay our second destination last erupted around the early 90’s and left a new massive crater half way up the original volcano. Our first visit to Lonquimay was six years ago and I have since fallen in love with the place. Jose, the local volcano specialist and governor of the local school is always on hand to welcome us. We stay in a lodge at the base of the volcano surrounded by araucarias trees and I am not exaggerating when I say we have the place to ourselves. So I was worried about only having two ski lifts! Lonquimay only has one main lift! But when you’re faced with untracked powder, no other skiers and a chairlift to yourself! Need I say more. The climb to the summit is pretty tough for those with no experience but for hardened ski tourers four hours will get you to the top and onto the massive crater. The ski down is always exceptional snow as it’s south facing. Don’t forget we’re in the southern hemisphere so it’s the other way around. There are numerous ways down but the best is straight down the south face through the gap in the rock face you can see in the photo.

Next is Llaima and this is my favourite with a total of three ski lifts! But again who’s complaining when you have the whole ski area to yourself. The thing about volcanoes is their round and if you have them to yourself with untracked snow you could still be skiing after three months making fresh track. The first time I visited Llaima Cristian had arranged a snow cat to take us as high up the volcano as the cat could go. Since then we have got to know the management of the area and the most important member of the resort, the snow cat driver.

One year we arranged a night climb to the summit and the cat driver took us as high as he could at 4am! Then another year for the 7 volcanoes Guido arranged something special. We were to summit Llaima and ski down the opposite side towards Sollipulli, a first for any group. Llaima is the amongst the most active volcanoes in Chile. The top is steep with hard snow and has to be accessed with crampons and ice axes. The crater is stunning as you are literally looking down into the centre of the earth. Tam, a hardened ski tourer and ski club of Great Britain rep who had joined me for some of the trip summed up the summit by saying it was the most spectacular sight he had ever witnessed! Since our trip Llaima has erupted in spectacular style. So it may be a while before the ‘devil’ rests again and we can plan our next trip here!

On to Villarrica. This is one of the most famous volcanoes in Chile and last erupted around 2000. We have managed to get most of our clients to the top of this, even non ski tourers. With the skis strapped to your backpack you can get to the top between 3 to 5 hours. The scenery from the top is spectacular and as the crater is open so you can literally see the lava spitting out. You cannot fail to be mesmerized with molten lava on one side and perfect snow on the other! There are numerous routes down and if you get the timing just right you can be skiing down in the sunset.

Onto the national park of Huilo Huilo and volcanoes Mocho and Choshuenco. Up to this point you could easily be forgiven if you have thought it cannot get any better. But Huilo Huilo is the most amazing place I have ever been to. Again we have the mountain to ourselves, private trucks to take us through the national park to the base of the volcano and our own snow cat to get us as high as possible. Huilo Huilo has no ski lifts! Yep you heard right, no lifts. But who needs lifts when you have your own private snow cat. From where the snow cat drops us it’s only a short one hour hike to the top of each volcano and from there the whole area to yourself.

Drop down south and onto our last two volcanoes. Casablanca is a ski resort with 4 ski lifts so this is big and crowded, I must have counted at least 20 other skiers! This was a totally different experience and again the drive up, the scenery and the skiing spectacular. The hike to the top of the volcano takes between 3 to 4 hours and even for non hardened ski tourers is easy. The skiing down is awesome and again just pick your route and enjoy. If you have time you can use the local lifts to ski off piste to your hearts content.

Last of the 7 volcanoes and one of the most spectacular, Osorno. Driving along the valley Osorno looms high and ominous and there is no escaping it’s glare! Guido was right when he said he left the best to last. We arrived at the base early and again we had the ski resort to ourselves. The skin up took 4 hours but this was different to the others as 300 metres from the summit the slope angle changes from 30 to 50 degrees. The last section has to be negotiated with crampons and ice axes. The ski down was spectacular and as we arrived at the bottom for some hard earned cerveza’s you could not help thinking that skiing would never be the same again. The land of volcanoes had us hooked.