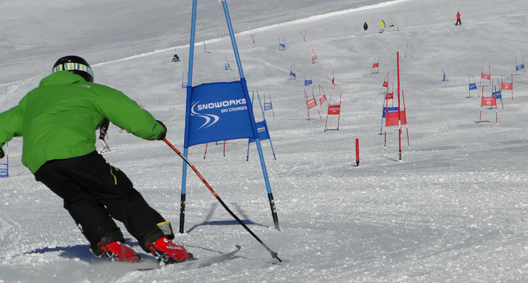 Combine the discipline of Racing in the gates with the skill of Carving and what do you get? RACE CARVE, of course!

Our popular iSKI course is back this summer (formerly ‘Race’, then recently temporarily changed to ‘Carving’…!) with a new name and carving skill-based emphasis. (Promise we won’t change the name again!)

‘Carving’, you know what it is, you’ve heard about it, the word is everywhere – every magazine, DVD, ski school… used by every instructor across the world. Everyone wants to do it, and every instructor wants to teach it. But what use is it REALLY and where does it come from?

The first thing to understand is carving is great if you want to ski fast, not great if you want to ski slow down in bumps, narrow gullies, steep slopes – or ice (unless you’re skiing on razors!) and generally off-piste. But on wide, open pistes, well-groomed runs – carving is what you want… what you really, really want (yes, it’s been around since the Spice Girls). And the ‘piste’ de la resistance… is to be able to carve in the gates – it’s where it all started.

A perfectly carved turn will result in making a curve without losing speed. If you’re losing speed whilst changing direction, then you need to skid. There are great examples of the equivalent of skidding and carving in other sports such as speedway and super bikes (click on each word and have a look at the difference between the two); rally racing and Formula 1.

If you’ve raced before you definitely won’t need convincing. It’s addictive. It’s fun and best of all it’s what we call ‘task focused’. Task focused is the way children learn to walk, run, jump, skip, in fact the way children learn most motor skills. Imagine what a child would look like if the first thing we did as they begun learning to walk is book them into walking lessons! Children learn motor skills by having tasks to achieve. Crawl from A to B, walk from A to B, run from A to B. etc etc. …and this is where Race comes into it’s own. It’s a clearly defined path that you have to follow down the mountain. The subconscious takes over and learning takes place quicker and more effectively then learning in most formal lessons. Best of all it’s completely natural and when you head to those slopes this winter you’ll be skiing faster with more control then you have ever done before…. and the bonus is you’ll have great fun learning.

We’ve got two Race Carve courses this summer on June 30th and July 7th in Tignes. Click for details.