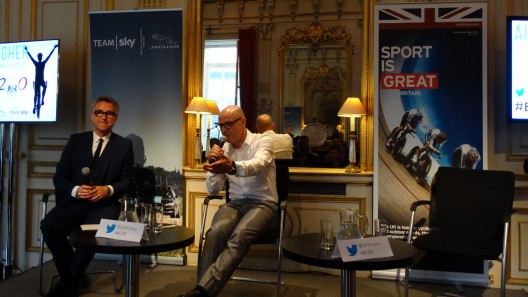 8 Olympic gold medals in Beijing and a further 12 Olympic medals in London followed by back to back British victories with Bradley Wiggins and Chris Froome in the Tour de France.

It all begun with a dream, a goal and of course a little (or lot) of financial clout to turn those dreams into reality. Having the backing is one thing but achieving the dream is another. So it was with great anticipation that we all sat down to listen to his words of wisdom and to see what we and others could learn and use in our everyday lives.

Much of the talk was based around principles already known and used by most athletes, coaches and teams involved in sport and businesses along with many individuals achieving success. Having clear goals, focusing on the process rather than the result, determination and dedication, attention to detail, psychological preparation but there were some principles that stood out above the others that when all put together have made the difference.

ATTENTION TO DETAIL – MARGINAL GAINS
If they could gain 100th of a second here, another hundredth there and do this 100 or more times then all those hundredths would make seconds and seconds at this level makes a huge difference. Nothing was left untouched, unlooked at, ignored as irrelevant. Of course everyone in cycling looks at all these things but they took it to another level. Everything was scrutinised in minute detail. A 100th of a second lost seems nothing but do this 10 times and it’s a 10th of a second and that’s the difference between gold and silver. 100 times could be the difference between gold and nothing at all or the difference in winning the Tour or being part of the peloton. Attention to detail is something we can all do but to do it with such dedication and determination to leave no stone unturned took something else. It took a change of philosophy with every member of the Team. A concerted effort by each and every individual even as far as cleaners travelling ahead of the team sweeping the dust from under the hotel beds and changing the mattresses. A tiny defect on a tire previously not noticed would not escape scrutiny.

We all talk about attention to detail. Even on our ski courses people may say we’re obsessed with detail. Dragging people down to the shop to change skis to get a few extra millimetres width under the foot, new lenses, getting a boot blown out, warmer gloves. A clear focus in skiing off-piste can be the difference between a great run and a run that could turn into a disaster or the difference between passing or failing the Eurotest. You can’t ski down a couloir thinking you goggles have steamed up, or your boots are hurting, or your legs are tired. But that’s exactly what most skiers are doing and wondering why they catch edges, their skis accelerate and they loose control. One detail overlooked, a lump here, a bit of ice there, a seconds loss of concentration and it’s hasta la vista baby.

Team Sky and British cycling took attention to detail to a completely new level. Things that were original laughed at and ridiculed have now become common practice by most teams. An example of this was not warming down after a race. On the track this was common practice but in the Tour it was not. Lets face it after 10 hours in the saddle pushing yourself to the absolute limit who can honestly say they want to come through the finish line get their cycle trainer out and peddle for a further 30 minutes. But that’s what Bradley Wiggins did. Nobody could believe it at first. Whilst everyone else was lying on the floor, getting on the team bus or taking interviews Bradly was warming down. Now it’s common practice.

Most top athletes would say they’re obsessed with attention to detail. But can that be said for all those around them. The coaches, nutritionists, hoteliers, travel organisers, mechanics, secretaries, sponsors, physios, cleaners, bike engineers, psychologists. A noise outside a window at night, a dog barking in the morning, a dissatisfaction with the breakfast in a hotel, a delay in settling a bill, a bus delayed, a traffic jam, a road closed, an over zealous traffic warden on the morning of a race can all play havoc to a well planned performance.

The Cyclists under the guidance of Brailsford have taken this to another level and produced unbelievable results and it’s a lesson we can all probably learn from in all walks of our life. An email replied to rather than left until another time, a table in a cafe wiped before the customers are seated, a hello, welcome, smile, acknowledgement, a phone call answered, a customers needs fulfilled, a complaint letter dealt with. In our own world of skiing getting the right training, warming up, warming down, edges sharpened, skis properly maintained, fitness, clothing, nutrition, practice, preparation.

THE CHIMP VERSUS CALCULATED DECISION MAKING
The ‘Chimp’ is a model used to understand emotional behaviour versus calm decision making. It’s something that we are all trained to recognise and work with in our ski teaching but Brailsford and his team have again taken the use or non-use of the ‘Chimp’ to another level.

In brief it’s about the recognition of the different parts of the brain and learning to control and use these effectively. The Limbic Lobe is the area of the brain that controls emotions. It’s the area that brings out the frustration, anger, fear and anxiety in us. The Limbex is termed by Brailsford and others as our inner ‘Chimp’. It’s the part of us that does not listen to reason, does to analyse and use information effectively. It’s the part of us that jumps in feet first and asks questions later. Our Chimp got us through the ‘caveman’ age. Kept us safe, fought for our survival, hunted food and at times run away and hid.

The Parietal Lobe is the area of the brain that processes information and controls sensory perception and movements that are goal orientated. It listens to reason, analyses and helps make decisions based on experience.

There’s a battle that goes on between these two. The cool calm calculated assassin, as Brailsford put it, versus the Chimp and his primeval instincts.

Brailsford under the guidance of team member Steven Peters have trained their athletes to control their inner Chimp. Peters is a Psychologist that was brought in by Brailsford to assist with the cyclists mental preparation. Recently he has been working with Liverpool football club who have this season turned into a team competing to win the premiership and Ronnie O’Sullivan who came back to win two consecutive world championships in 2012 and 2013. It was Peters that developed the Chimp model. Brailsford also hinted that the England football team will be using him this summer in preparation for the World Cup.

As Brailsford explained. You can’t just lock the Chimp away and throw away the keys. He’s useful but has to be tamed and sometimes let out to vent his frustration but what he mustn’t do is get in the way and cause havoc of a well orchestrated plan. Which is often the case like on many occasions such as a penalty shoot out where skilled goal scorers fail to even hit the target.

In every day activities the Chimp can cause havoc. An email that has infuriated us is returned instantly followed 10 minutes later with regret. “Did I send that?” An emotional defence, a barrier put up to defend ourselves rather than listen to reason. An insistence in doing it this way rather than loose face. The Chimp can be responsible for team disharmony. Left to his own device he’s irrational and emotional. True, sometimes he can get amazing results. But these results are often sporadic. They can be great fun to watch creating great spectator interest. Tennis players that are one minute producing unbelievable performances and the next hammering the racket on the ground and berating line judges. Debates that turn into name calling and accusations. Fun, for some yes, but effective, no.

Brailsford and his team have helped their athletes control their inner Chimp as he puts it and there is no doubt that the results speak for themselves. One look at his team of cyclists and you instantly get an impression that these guys are good. There is an air of confidence about them. Controlled performances delivered with absolute precision. Calm cool assassins.

We can all learn to control our Chimp and everyone in the room could be seen smiling at the acknowledgement of their own inner Chimp’s behaviour. In the day of instant communication our chimps can have a lot of fun and it’s easy to let them out to play. But we could do with remembering that a chimp’s misbehaviour could have repercussions that could last a long time and be regretted at a later date.

We all have dreams but to turn them into reality is different. That takes determination. In every day life it’s the doers that get things done. The dreamers dream. Dream of skiing better. Dream of passing their exams. It’s the doers that make it happen. It’s the doers that open the curtains and when it’s snowing and a blizzard outside with zero visibility they still get up, get dressed and head out. It’s the doers that are up on the first lift and back on the last. It was clear from Brailsford chat that if you wanted to succeed, dreaming and motivation wasn’t part of their game plane it was doing it. It was dedication and commitment and not just the athletes. Everyone, every single team member.

THE MONEY
Then there is of course the money. Brailsford admitted that the turning point to their success was originally Lottery funding. This enabled them to produce a long term plan. They had high goals but with funding they were able to put into place a long term sustainable plan and with dedication, commitment and attention to detail they were able to carry these plans through. Without money then their goals would just remain dreams. It is the belief in your ability and determination to see it through that makes great entrepreneurs. They get their money somehow. Borrow, create partnerships, bring in investors, stakeholders. Whatever is needed to generate money to achieve their goal. But there’s no backing down, no cold feet. An unwavering belief in yourself and your ability.

One member of the audience questioned whether the investment in Team Sky was fair. Did they have an advantage over the other teams? There was no doubt money was needed but as Brailsford pointed out there are two other teams that have greater budgets than they do. But Team Sky have great marketing and branding so it appears they have the biggest budget. But that aside it’s what you do with the money. As many football teams know you can spend as much as you want but money alone will not create success. You need a vision, a plan and the commitment to carry out that plan to its conclusions but above all you need talent. So find the talent or create the talent and then get to work to turn the dream into a reality.

Phil Smith was guest of the British Ambassador to France along with the other members of the delegation from the British Association of Snowsport Instructors including Gareth Roberts Chairman, Stephen Burke Chief Executive, Debbie Khadi from BASI headquarters plus BASI instructors working in France Helen Trayfoot, Don Bates and Katie Campbell.