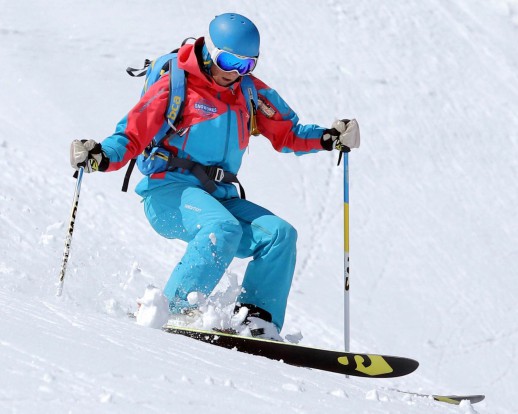 Free
1. Not imprisoned or enslaved, being at liberty.
2. Not controlled by obligation or the will of another.
3. Not affected or restricted by a given condition or circumstance.
4. Not subject to external restraint.
5. Not literal or exact.
6. Unguarded in expression or manner.
7. Given, made, or done of ones own accord.
8. Not fixed in position, capable of relatively unrestricted motion.
9. Not bound, fastened or attached.

Maybe it’s just who we are and the trait of humans that we need rules. Rules that govern everything we do even to the extent of how we ski! Of course there always have to be some rules otherwise we would be in danger of harming others and ourselves hence why the skiers code of conduct exists in skiing and why when we are learning we go for lessons, to learn to ski safely.

Put the Skiers Code aside and other rules that help keep us and others safe in the mountains, how many skiers actually ‘free ski’? The need to be governed by rules even in ‘how’ we ski is highlighted when some skiers come on our courses for the first time and I ask them their goals.
“I need to learn to ski correctly”
“I get down anything but don’t do it right”
“I need to be told what I’m doing wrong”

Where does this yearning for doing it the ‘right way’ come from? Looking at the great sports stars and world champions they all have one thing in common. They do it ‘their’ way not the ‘right’ way. In skiing we have the likes of Bode Miller who for many was labelled untidy but continued to win everything. In running the great Michael Johnson who as a child was labelled as running ‘a bit funny like a duck’. But the child who ran ‘funny’ went on to win 12 Olympic and World Championship gold medals and hold the 400 metre world record for a staggering 17 years. Then there was the great Dick Fosbury who redefined his sport for ever when everyone else was going over the high jump bar forwards he went over it backwards. More recently in ski racing we have had the great Ted Ligety who a few seasons ago redefined Giant Slalom skiing technique and recorded some of the biggest winning margins in ski racing.

Great sport stars don’t try to do it ‘right’, they have freedom. This freedom comes from an inner confidence they have. To be free is difficult and if you’re not one of the best you’re chasing answers. How do you become the best? And the search for becoming the best creates restrictions that then inhibit you from becoming the best. It’s a vicious circle.

When I was young and learning to surf youngsters used to watch and copy the best so the sport never really changed. But these days surfers, skateboarders, BMX bikers, snowboarders and freestyle skiers are creating their own rules as they go along. It’s exciting to watch and constantly changing and evolving.

Learning to ski so called ‘correctly’ can be a good thing in the early stages. Learning the nuts and bolts first. Doing the basics correctly then adapting them in a ‘free’ manner at a later stage. But ‘freedom’ often fails to materialise at a later stage. The yearn to ski correctly early on sticks with many skiers throughout their skiing career who can end up being restricted rather than free.

One way of helping you to be free but effective is to understand the difference between judged and measured sports. Judged is someones personal opinion, measured is fact. Imagine how far the great sporting stars I mentioned earlier would have got if their sport had been judged? Luckily now in some judged sports such as freestyle skiing along with park and pipe the judges are becoming as versatile as the skiers themselves and embracing individuality and innovation.

I remember an example of judged versus measured performance recently. A skier had posted on social media a video of himself making short turns down an easy flat run and asked for feedback on his skiing. There were the usual 50 or so comments about his technique, many contradicting one another, then I wrote something along these lines:

“I can give you some feedback but first of all I need to know what your goals are? What is it you actually want to do?”
“I just want to ski better” was the reply. So the thread went on.
“Be better at what? Bumps, off-piste, steep terrain, powder? Ski faster, slower? Race, park? Have more fun, ski stylishly, ski with abandonment? Copy another skier, develop your own style?”
“I just want to ski like a ski instructor” was the reply.
“Like a French instructor, British instructor, Italian instructor, Austrian instructor?” I replied. You can guess by now the guy was getting pretty frustrated with my comments. I was searching for some measured criteria so I could then give him accurate useful feedback.

You see it’s difficult to be free when adhering to judged criteria. But if the performance is measured then you have the freedom to interpret the task your way.

Ski instruction is traditionally judged and can restrict innovation, freedom and individuality if you are not careful. Judged instruction and feedback can be useful along with certain rules in ski teaching that keep us and others safe. But after safety is adhered to you have the freedom to interpret skiing how you wish.

It’s a great feeling knowing nobody else does it quite like you. Be a free skier, be unique, be the architect of your own skiing.

Photos: Emma Carrick-Anderson in action. “We are all different”.
Photo: Polly Baldwin dynamicpictures.co.uk