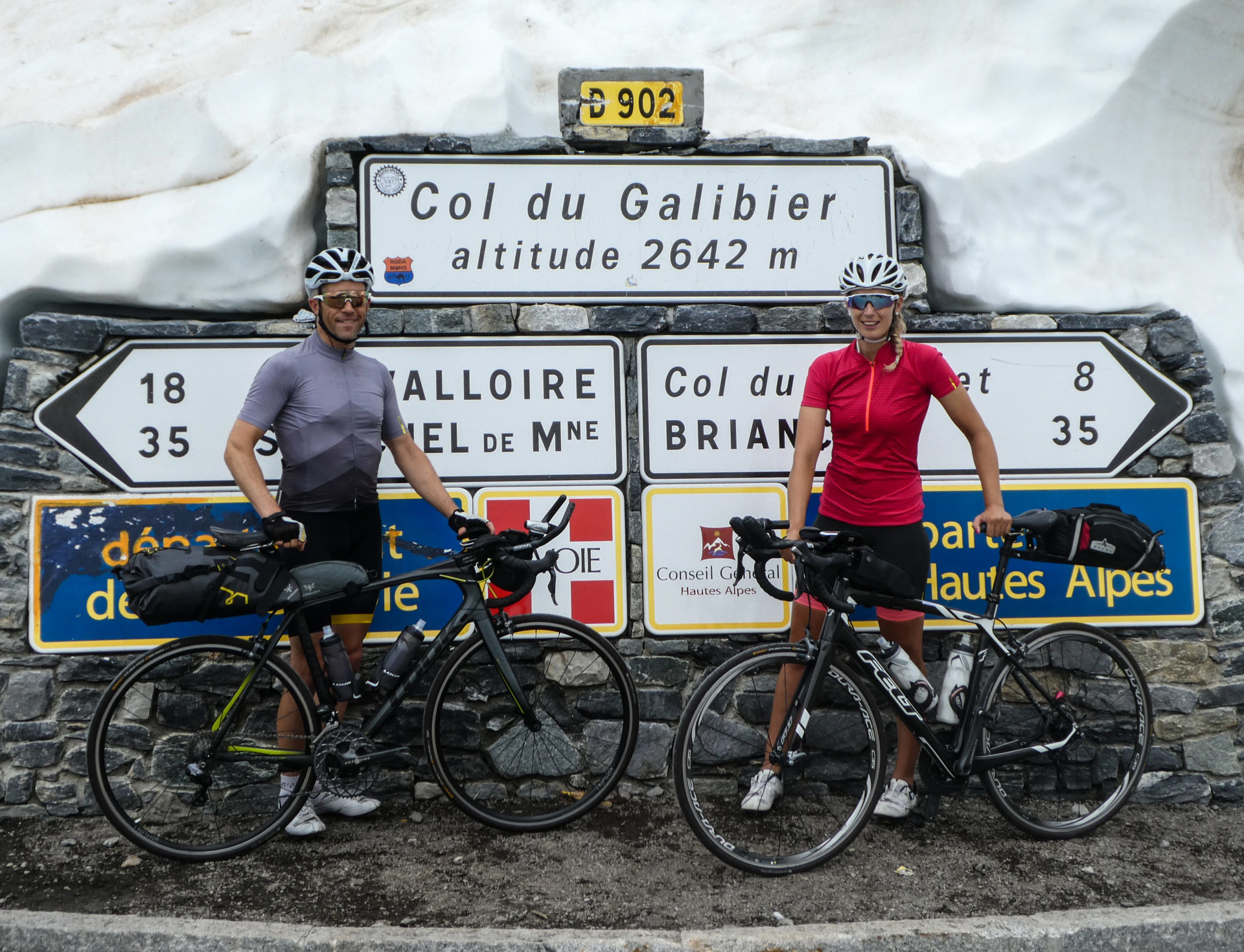 Ever wondered what members of Team Snoworks get up to in the summer? Lee Townend with partner Katie took on the massive challenge of following in the footsteps of the epic 1911 Tour de France.

FOLLOWING THE WHEELS OF THE FIRST TRUE TOUR DE FRANCE
A 5,439km Cycle challenge, inspired by the 1911 Tour de France.

The 1911 tour is regarded as the first modern Tour de France. It covered a distance of 5,439km, over 15 stages, each stage averaging 350km in length, with the longest stage totalling 470km. 48,000 vertical meters of ascent were climbed and no support vehicles on the road were allowed. The race was run over 30 days and only 28 of the 84 starters finished.

Today’s Tour is quite a different animal. It’s 2,000km shorter than the 1911 route, its longest stage is 231km, riders have support vehicles, and its 21 stages are run over 23 days. Our challenge was to ride the 15 stages of the 1911 tour, without a support vehicle, and in just the 23 days the current tour takes! No trains, no taxis. no rest days, just pedal power! Why I hear you ask? Several reasons. Our love for cycling, a desire to see more of the beautiful country I now call home, and a sadistic curiosity as to what my body is physically and mentally capable of achieving. 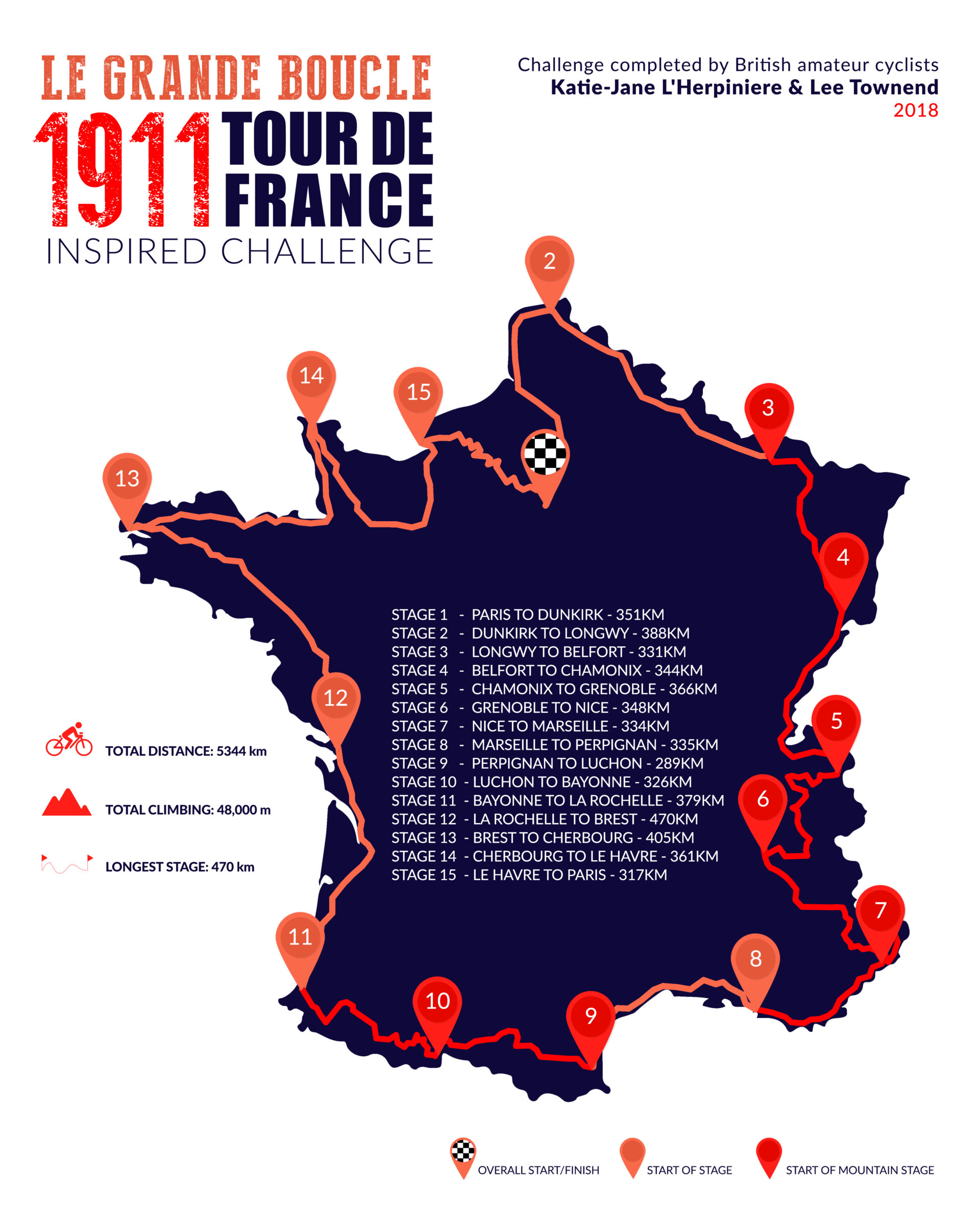 Those of you that know me well, know that I am a little obsessed with my road bike. It comes a very close second behind skiing! I find it a perfect compliment to skiing with regards to fitness, cardio, leg strength, core stability and zooming down the mountains! Whilst I keep in shape and enjoy cycling, I was very aware this challenge was going to be much more than a series of consecutive bike rides.

The Physical Challenge
It goes without saying there is a huge physical application to this challenge. However, it was by no means the key player in the potential failure or success. In fact, I would go as far as saying the peddling was almost the easy bit! I believe the ability to ride your bike this far is within us all. The human body is such an incredible thing and capable of so much more than we ever ask of it.

Whilst I usually love to ride my bike fast, the physical focus on this challenge was to ride slow and steady in a bid to prevent the body from breaking, manage the inevitable repetitive strain injuries and reduce muscle and energy wastage from the deficit of just 9,000 calories being consumed during each stage but 11,000 being burnt. The bikes were also heavy, ladened with food, wet weather gear, cold weather gear for night riding, power packs to charge lights and garmins, repair kits and medical supplies. So speed wasn’t really an option. Although the body got stronger and riding such long distances became easier with each stage, sleep deprivation took its toll in the later part of the challenge. We knew some of the stages would take us 24 hours to ride, so therefore we organised the challenge based on 1 ‘day and night’ being 36 hours not 24 hours. This ‘in theory’ allowed up to 24 hours to ride the stage, then 12 hours to eat, shower, sleep, and prepare food and get organised for the next stage. In reality, we found sleeping impossible on every other of our rest windows as they were during daylight hours. Combined with riding through the night this completely messed up our body clocks. It turned out that in a 72-hour period (2 of our days) we only managed 6 or 7 hours of proper, ‘in a bed sound asleep’, sleep. As the challenge progressed roadside power naps became critical for safety. Initially, we managed with just 20 minute naps, but by stage 9 we had to change that to 45 minutes. We slept on the ground under our foil survival blanket anywhere that was sufficiently sheltered, such as toilet floors, restaurant terraces, shop doorways and bus shelters. 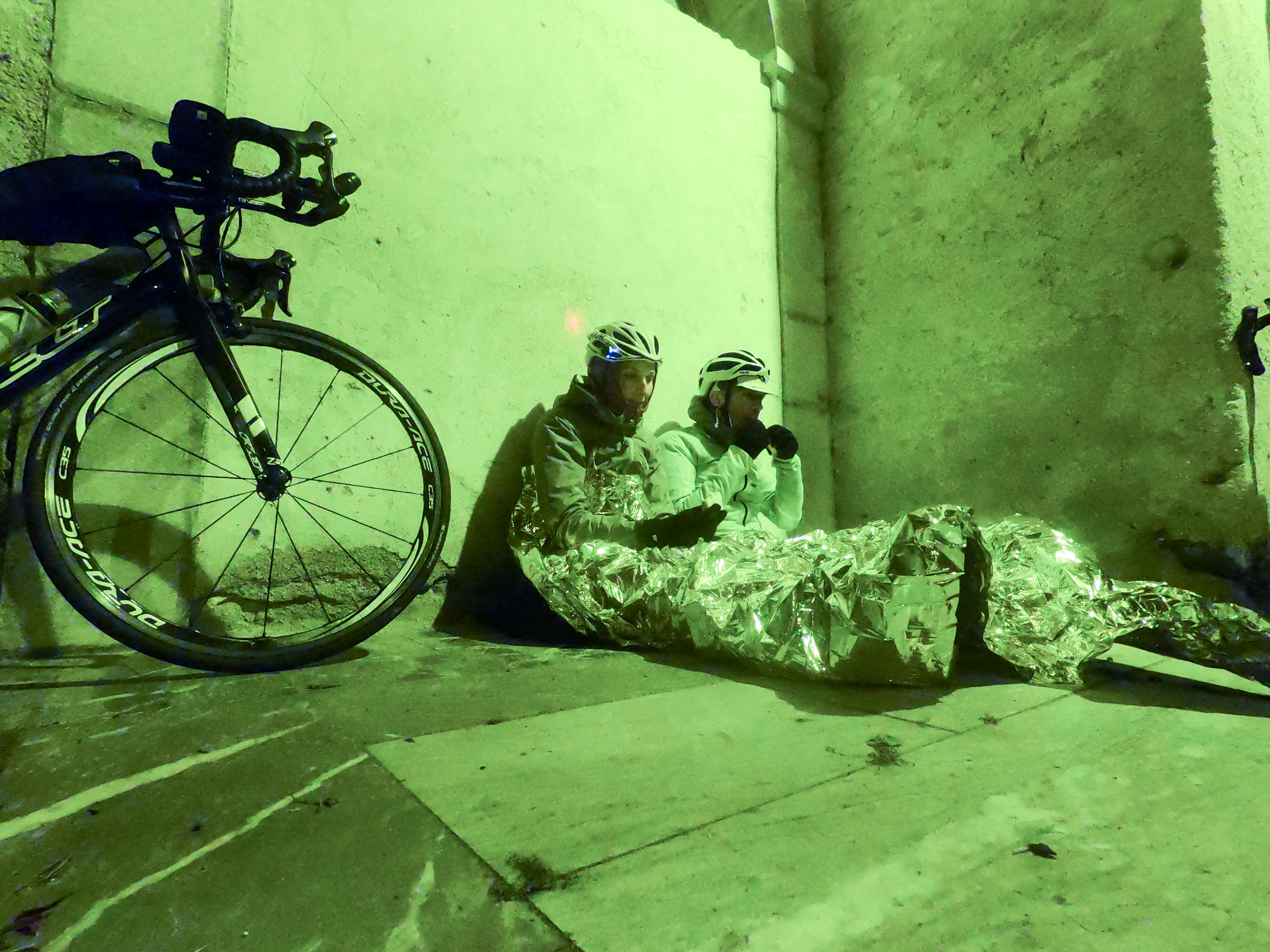 The Psychological Challenge
This is where it was ‘make or break’ for me. I remember being 300km into stage 4, it was about 3 am, we were riding along the Sallanches valley floor heading for Chamonix when I just stopped pedalling. Katie encouragingly said “Come on Lee, you can do it” to which I replied “I know I can, I just don’t want to!” Yet only 7hrs earlier at 8 pm we were riding through the most stunning scenery in the Jura mountains and I was thinking this is one of the most amazing things I’ve ever done in my life. Until this challenge, I have never experienced such an incredible tug of war of emotions on a near-daily basis. So the following tactics were used to help overcome this psychological battle:

Breaking it down into smaller parts
I treated each stage as a one-day bike ride (whilst some stages took 27hrs!) and broke each day down even further into 50km or 60km blocks. I could focus on 60km, it always seemed doable. 6 of those and your 360km stage is done! After each 60km we would stop briefly and eat, stretch, the usual espresso, and then off again. If I had straddled my bike at 8 am and thought “I have 470km to ride on this stage” then I think failure would have been a considerably more likely result.

Teamwork
Don’t ask me why, maybe there is a science behind it, but if I was having a dark time and couldn’t/didn’t want to continue, then Katie was feeling good and able to encourage me, and vice-versa. The ability to help, support, motivate and lift your teammate’s spirit in times when all you want to do is sleep, or worse still quit, is huge.

Perspective
After riding stage 1, Paris to Dunkirk, my interest in the area I was travelling through was inspired, and I downloaded a few audio books about Dunkirk, the Normandy beaches and the Battle of Britain. If listening to these doesn’t put a few dark moments on the bike into perspective then nothing will! After all, this bike ride was by choice!

Highs and lows were inevitable. Between us we endured; acute sleep deprivation, injuries, weeping saddle sores, cyclist palsy (loss of use in your hand), all types of weather, including the dreaded Mistral headwinds which reduced our speed on the flat to just 6km/hr, dangerous roads with no hard shoulders, carrying our bikes through boggy marshland, dirt trails, and roads that were completely missing. But how lucky were we to enjoy the freedom that three weeks on a bicycle in beautiful France gives. The wildlife, the scenery, the architecture. Mountains, coastlines, cities, all types of agricultural land. Stunning sunsets and sunrises. So many memories made.

Would I do it again? Would I advise you to do it? You’ll have to ask me when you see me on the slopes. 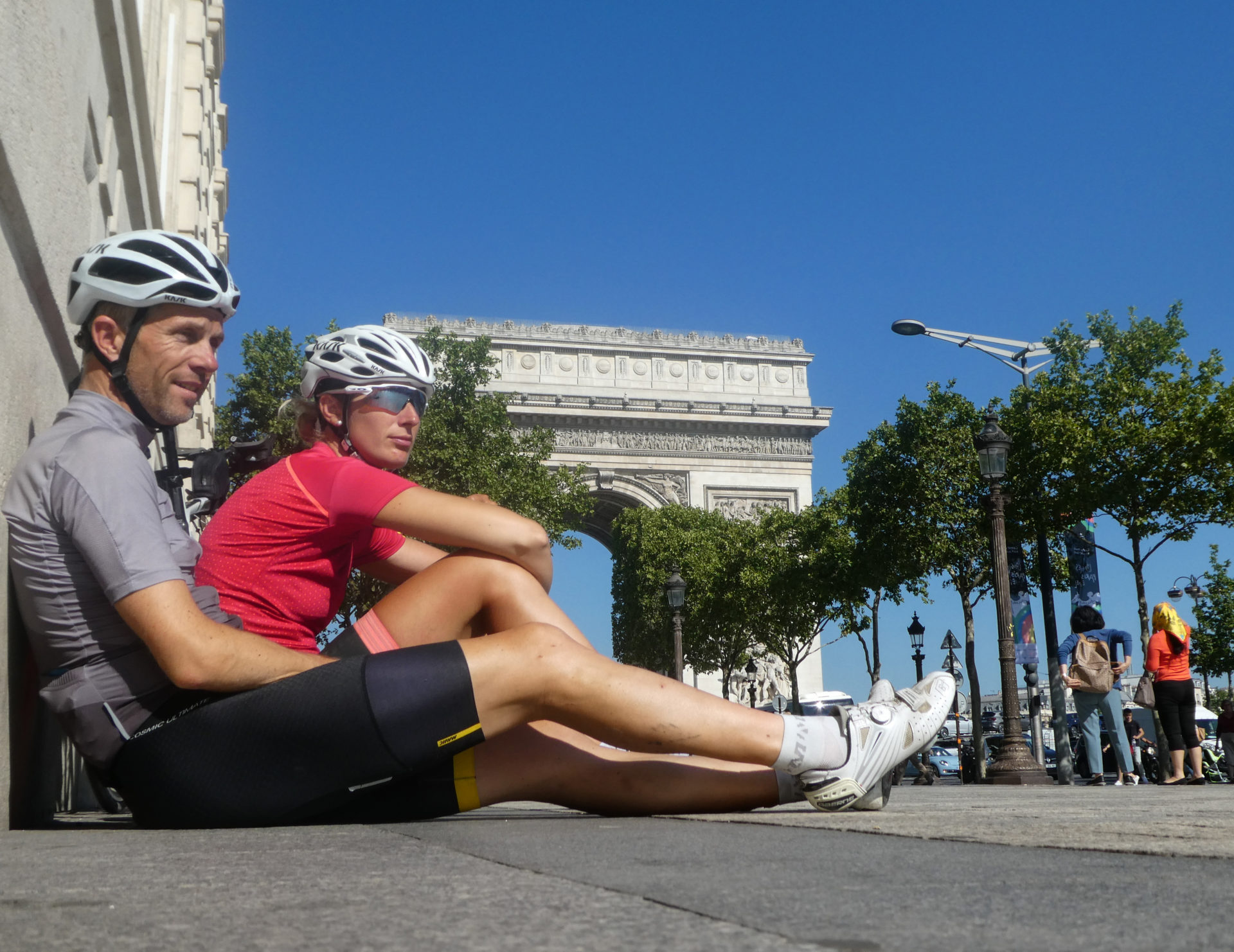