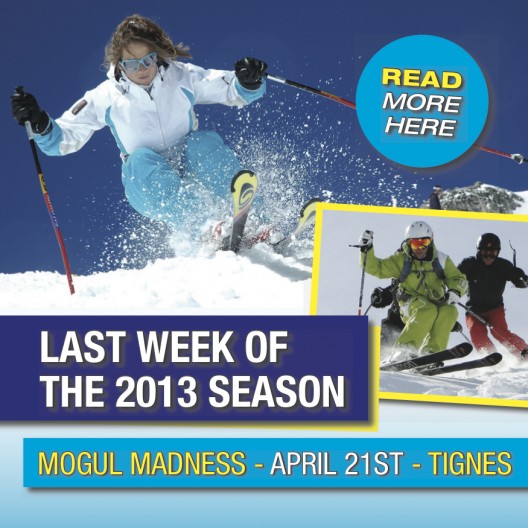 It’s the end of the season when our attention turns from powder to moguls. April is Snoworks ‘Mogul Madness’ time. So to get in the mood I thought I’d jot down some pointers about skiing moguls.

1. TAKE THE JOURNEY
Many aspirant mogul skiers watch expert mogul skiers and try to analyze and copy what they are doing. Of course what you are NOT seeing is the JOURNEY it’s taken to get to that point. The skiers you need to watch are the skiers just ahead of you on their own journey.

So when watching competent mogul skiers you should be saying to yourself. Wow, brilliant, I wonder how they were skiing when they were just above my level and THAT is the image you should be using to develop yourself. It’s a journey and every skier has to take the journey.

The other day I asked my group (aspirant off-piste skiers)
“Who skis powder with there feet close together?”
“Instructors and guides” came the answer.
“Have you ever seen a child ski powder with their feet together?” I asked?
“No”, was the response.
“When do you think most instructors and guides learnt to ski powder?” I asked?
“As a child” they responded.

A classic example of the importance of recognising the journey that all skiers take and not attempting to copy something which is way too far along the journey. It’s ok seeing the end point but you need to know how to get there. It’s like following a map. Find your destination, then find your route to get there.

Of course it should be the instructors job to show you the route. So I always try to ski a few weeks above the level of my pupils.

2. CONTROL SPEED
Ah yes the classic ‘how to control speed’. It’s at this point I should direct you to one of our videos on ‘moving snow’. Click this link to take a look.
Moving Snow

Most skiers believe they control speed by ‘turning’ which is a bit like you attempting to control speed on your mountain bike by turning the handlebars. No, you use brakes. So you need to develop a braking system in your skiing which you can use as accurately as the brakes on your bike.

Braking is created by the action between two surfaces. On your bike it’s the rubber brake pads and the rim of the wheel. The greater the ‘friction’ you create between the two surfaces the slower you go. How simple is that?

So in skiing you also have two surfaces. The edges of your skis and the snow. You have to create a reaction between these two surfaces in the same way as using the brakes on your bike. In skiing you have to ‘move’ the snow with the edge of your ski or skis. The amount of snow you move will determine your speed.

Of course you don’t see this when watching competent mogul skiers as you’re too busy watching other things like; the legs flexing and extending, the width of the stance, the direction the body is facing or the pole plant. The competent mogul skier is also often completely unaware of this action between their edges and the snow as it has been learnt at the subconscious level.

Let me give you an example of an expert mogul skier flying down the moguls following the troughs. Lets say he/she has 1 metre of space in the first trough to control speed. He/she wishes to travel at lets say 30kph. So they position their skis in the hollow and use their edges to move enough snow to maintain this speed. Of course the chance of doing this is zero! So lets say they carry an extra 2kph into the next trough with only 80cm of space in which to move enough snow to pull back the extra speed. The edge angle is increased and more snow than before is moved but they still fail to get quite enough braking action. So they take some air and land half way down the next trough. Now they only having 50cm of space in which to move enough snow to control their speed and get back the extra speed they have created from before. They increase the edge angle, push with all their strength and move more than enough snow and slow down to 28kph. This is happening all the time between every mogul down the every run. An endless variation of ski and snow action. A bit like using your brakes on a mountainbike.

Now go over to the very same skier and ask he/she for a couple of tips and they say. “Face your shoulders downhill and get a good pole plant”.

They’ve just told you ONLY what they were aware off. NOT what was happening at the SUBCONSCIOUS level which actually got them down the moguls in the first place.

So as an aspirant mogul skier you have to learn to control your speed by moving snow (watch the video).

3. THE LINE
arghhhhhh. The dreaded line. Again aspirant mogul skiers watching expert mogul skiers are watching the line taken by skiers that can already ski moguls. You need to know what line they were taking when they were just above your level (the journey) and the answer to this is ANY LINE.

4. THE TASK
Now this is important. The level of difficulty of the task.

When you begun skiing you started skiing the Greens, then the Blues, then the Reds, then the Blacks. You had a progression where the level of task was matched to your experience and aspirations.

Moguls are no different. You have green moguls, blue moguls, red moguls and black moguls. If it’s your first time on moguls and you find yourself in black moguls (which happens all the time), no chance. It would be like learning to ski on a black run. You have to start with an easier task and work your way upwards.

The task should be challenging but achievable. So if you are completely out of your depth then you have selected a task way to difficult.

You can learn to select the appropriate task. Look at the moguls and think to yourself  “can I ski these?” and if the answer is no, then the moguls are either too big, the slope is too steep, the snow is too icy or the moguls are too awkward.

You can get used to selecting the right task then gradually increase the level of difficulty of the task as you improve.

So once again if you really want to ski moguls take a look at our video ‘Moving Snow‘. It’s not dedicated to moguls but will give you an idea.