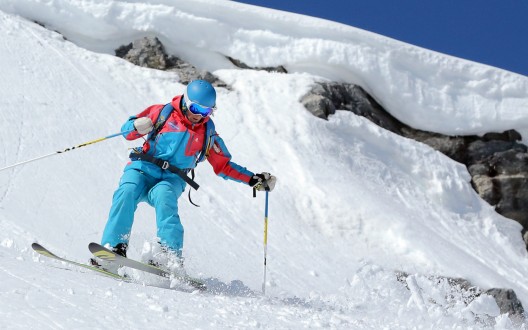 Parallel Skiing – A Bygone Era Or A Different Sport?

Photo: Emma Carrick-Anderson, 4 times Olympic ski racer, Tignes
Taken by Polly Baldwin Dynamic Pictures
Phil Smith, Director of Snoworks Ski Courses, asks the question – Is skiing the only sport in the entire world where such an importance is placed over the feet being parallel?

I read the other day in a newspaper that  ‘parallel skiing’ was the ultimate goal for every skier. Coming from an all-mountain background this was certainly news to me. I thought the ultimate goal was to ski in control all over the mountain whatever the conditions, explore great skiing and of course have great fun doing it.

So with the news that parallel skiing was so important I thought I’d spend some time researching other sports where the ultimate goal is to move both feet or both hands at the same time and in the same manner so they remain parallel.

• Rock climbing – Could have a problem moving feet or hands parallel – may fall off the rock face! With the exception of Tom Cruise in Mission Impossible 2 and Sylvester Stalone in Cliffhanger!
• Motor racing – Hmmmm pushing the break and the accelerator at the same time could be interesting!
• Running – ok with the exception of the three-legged race, middle legs only!
• Jumping – no
• Football – no
• Rugby – no
• Tennis – no
• Canoeing – no
• Boxing – no
• Fencing – no
• Windsurfing – no
• Horse riding – yes possibly, but not the horse!
• Cycling – no, except for going in a straight line downhill and even then the feet are in different places!
• Archery – no
• Pole vault or any other athletics discipline – No

In fact after going through almost every sport I could think of, I came up with only the following where hands or feet move parallel:
• Butterfly swimming – Only used in lanes not for water polo.
• High diving – feet and hands sometimes but not always.
• Rowing – Only on flat water not in rapids and only in straight lines.
• Sky diving – Only when you don’t need to change direction i.e. just falling.
• Sledging, skeleton or bobsleigh – providing you only travel in a straight line or are one of the passengers in the bobsleigh!

I’m sure there’s a few more that I have not come up with.

So if parallel skiing fits in with the above examples it’s either a sport where the environment does not change, a sport where you travel in a straight line or it’s the only exception in the entire world!

Now we know the environment is constantly changing in skiing. We also know most of the time we are changing direction. So are we saying skiing is the only sport in the entire world where there is such an importance placed on the feet being parallel?

Now you may say – “isn’t skiing parallel – skiing well”? Certainly the journalist that wrote the article seemed to think so!

So let me give you examples of two very different skiers.

– Skier number 1. Can ski everywhere on the mountain, down every piste, down every mogul field, off piste whatever the conditions, every couloir no matter how steep and can ski pretty fast – but does not ski parallel. They change the edge of the new outside ski before they change the edge of the new inside ski. This is so they can constantly grip the mountain, feel safe and be in control. Similar to rock climbing or closer to home, walking and running. You could say skier number 1 rarely skis parallel.

– Skier number 2, skis mostly on groomed, well pisted runs and struggles to ski off piste, steep terrain and anywhere where the snow texture and terrain begins to get more varied like ice and bumps. Their skiing is mostly limited to red pistes and easy backs where the environment is more constant. But they do change their edges at the same time so they ski parallel.

The question is – who is the more competent skier and which skier would you prefer to be?

… and the final question is. Why is skiing the only sport in the entire world that takes place in an open environment, which involves constantly changing direction where there is so much importance on trying to do it with parallel feet?

Is parallel skiing a bygone era or for the millions of us throughout the skiing world involved in all-mountain skiing are we involved in a different sport to the journalist who wrote –  “‘parallel skiing’ was the ultimate goal for every skier”?

Snoworks run all-mountain ski courses where you can learn to ski everywhere – and you don’t need to ski parallel.

Click here for a listing of all the courses.