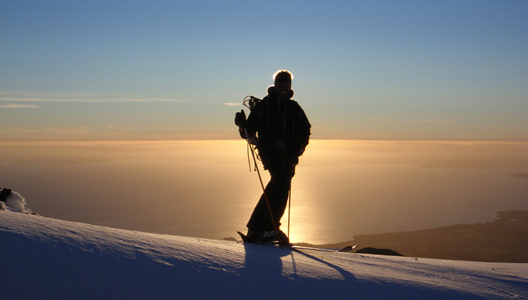 SKIING THE PACIFIC RING OF FIRE

If someone had said to me I would be standing on the top of a live Volcano looking down into the centre of the earth with bubbling lava one minute and then skiing off piste in perfect snow the next I would have thought they were crazy. Yet here I was doing exactly that. Chile is a country of startling contrasts which on average is over 2,700 miles long, the equivalent distance from Edinburgh to Baghdad and never more then 150 miles wide with some of the most active volcanoes in the world.

I first started my adventures in Chile six years ago when I was lucky to meet a good friend of mine Cristian Levy. Cristian runs his own Chilean tourism agency based in Temuco in the centre of the Lakes and Volcano district. I was familiar with Valle Nevado and Portillo the main Chilean ski destinations but Cristian persuaded me there is a totally different side to skiing in Chile.

Antuco, Corralco, Araucarias, Pucon, Huilo Huilo, Antillanca and Osorno are ski areas very few skiers have ever heard about so when I took my first group there 6 years ago needless to say I was pretty apprehensive. We’re used to The 3 Valleys and the Espace Killy with hundreds of ski lifts stretching in every direction. Here we were traveling half way around the world to ski in resorts with only one or two ski lifts! You have to be joking I thought. Nervous was an understatement. I had persuaded some of my guests to take three weeks off work and part with a fare chunk of their income to ski in a resort with two lifts! What’s the point heading half way across the world to ski in somewhere exactly the same as our own back door, I kept saying to myself. My worries were totally unfounded, this was a totally different type of ski experience. The scenery spectacular, the hospitality overwhelming, the skiing totally different and the opportunity to ski from the top of live volcanoes! Chile had me hooked.

Ski Chile
One of the most diverse ski adventures you will find anywhere in the world. A no holds-barred ski extravaganza combining amazing skiing experiences, spectacular southern-hemisphere winter scenery with extraordinary local culture – touring Chilean ski resorts staying at their in some amazing local hotels. This trip is an opt in experience with the possibility of skiing from the summit of 5 volcanoes.
Click For Details

Ski Chile Volcanoes
Designed for those that have skiing as their top priority. A breath-taking 2 week trip combining unique ski experiences with the option of skiing from the summit of 7 volcanoes in 6 destinations. New for 2012, we’ve opted for local ‘cabin’ accommodation and contracted in our own chef to accompany us throughout the trip making sure that skiing remains the number one priority whilst keeping costs as low as possible. This is spectacular skiing and scenery at its very best.
Click For Details