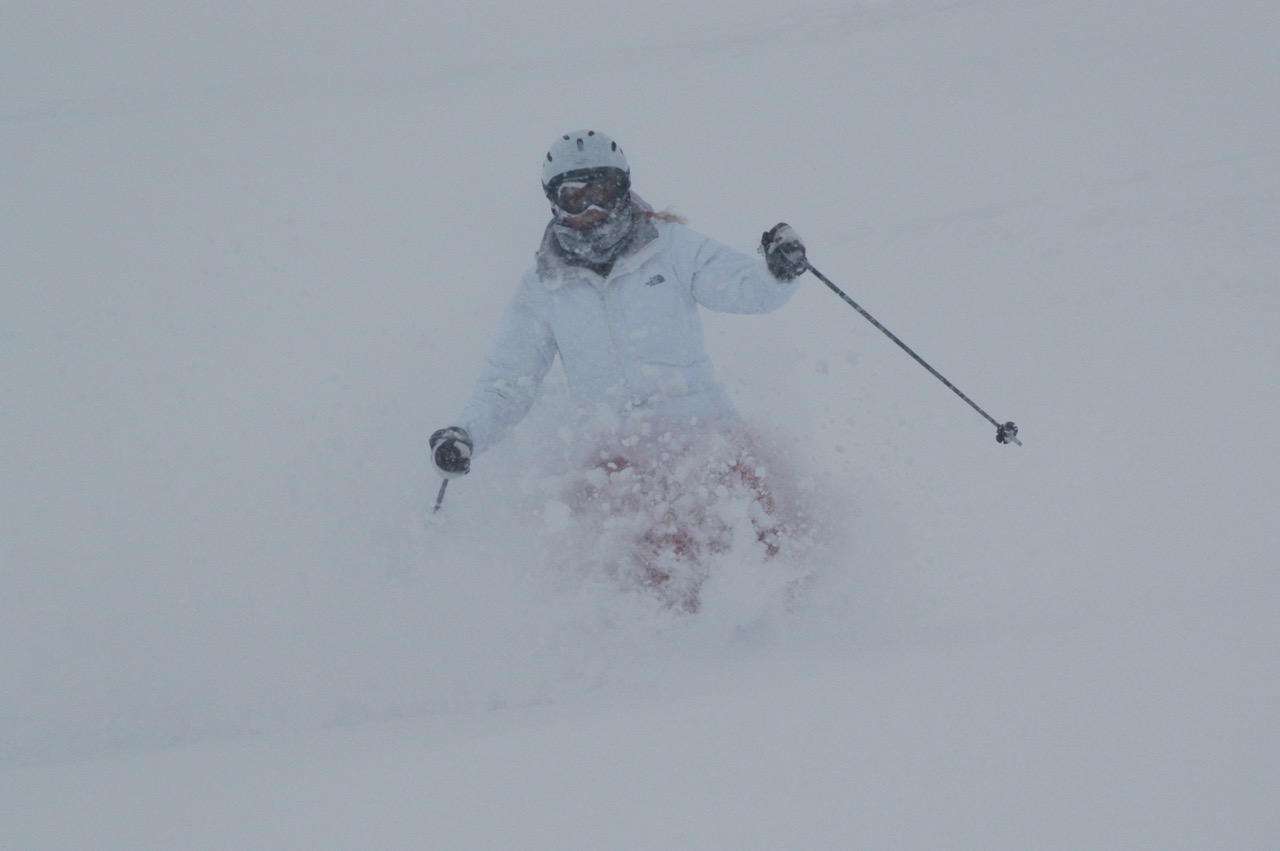 Skiing In Bad Visibility – The Art of Focussing

YOU WILL GET BAD VISIBILITY
I remember fondly one of my favourite films featuring Dudley More as an advertising agent who is fed up of pulling the wool over peoples eyes and decides to level with the public and tell them exactly ‘how it is’. His bosses all think he has gone crazy but somehow his adverts mistakingly get published and telling the truth really takes off. I feel a bit like this with skiing and ski lessons. Ski advertising is full of photos of blue skies, perfect snow and untouched light fluffy powder. We sell the dream, we want the dream but the reality, as everyone knows, is that we may get a few of those dream days and the occasional whole week but more often than not the snow must come down and when it does the dreaded bad visibility descends and chaos on the slopes ensues.

For many skiers, bad visibility can ruin their skiing. Late breakfast, long lunch, back early, frustrated, demoralised or heaven forbid – injured. For others, the show must go on, and for many die hard all-mountain skiers nothing will interfere with their skiing not even a spot of bad visibility.

So if when the bad visibility descends you feel like a rabbit in headlights, frozen, unable to move then it’s time to learn the ‘art of focussing’ which can make every day, no matter what the visibility, seem like a bluebird day. Read on and learn how.

FOCUS
Focus (or commonly known as your concentration) is like a spotlight at the theatre. You can move it around, point it into the distance, shine it nearby, change the width, highlight lots of information or narrow the spotlight and illuminate a small bit of information.

To ski well in bad visibility you have to treat ‘controlling focus’ the same as you would any aspect of ski technique. Getting good at controlling focus is an absolute game changer and it can totally transform your skiing. Fact!

FAR AND NEAR FOCUS
Many skiers have their focus far too far into the future to ski well in bad visibility. This is because skiers generally use their focus to check where they are going (route finding), check to see where their mates are, where their instructor is or looking at other nearby skiers. Sometimes a skiers focus can be as far as 100m, 200m or even further ahead but as the terrain starts to become more varied or visibility goes you need to learn to bring your focus much closer to you in order to see the variations in the terrain you are about to ski over.

Many skiers use their central and peripheral vision in a fairly haphazard manner. It’s a bit of a lottery. Generally using central vision for route finding (far into the future) and peripheral vision for the terrain they are about to ski over. Most of the time in good visibility it’s possible to get away with this kind of focussing but as the visibility begins to go or the terrain becomes more varied this kind of focussing does not work.

The key to ski well in bad visibility is to use your focus skilfully.

YOUR SUBCONSCIOUS BRAIN – SEE & REACT
Your subconscious brain is immensely clever at reacting to things you see. In fact most of our behaviours are taken care off by our subconscious. We don’t even know it. Walking, running, climbing up and down stairs. The brain sees something and every experience you’ve ever had in the past is used to create your immediate behaviour. However there’s one critical element in the subconscious being able to react – the brain has to see it. So in good visibility when your focus is a long way into the future route finding, watching your instructor, your mates and other skiers the brain will sort of see all the changes in terrain and snow texture at ground level in front of you through your periphery (even though slightly burred) but in bad visibility it can’t. So none of those subconscious reactions that take place on bluebird days can take place when the visibility goes. Disaster ensues.

SKIING IN THE ‘NOW’
In bad visibility you need to do everything you can to see the changes in snow texture and terrain right in front of you. That means you need to bring the focus right back to more or less the immediate future. You need to see every lump, bump and change in snow texture right in front of you so your subconscious can take care of it all by itself. It’s just like walking up and down stairs or running down a hillside on uneven terrain. It works like magic.

Most skiers as soon as the visibility goes believe they cannot see anything. It’s a natural response. But you will be surprised at what you can see. 90% of the time in poor visibility you can still see changes in snow texture if you look carefully. You’ll have 1 metre, 2 metres, maybe as far as 3, 4, 5 if not more metres of visibility. This is easily enough distance for the subconscious brain to see, react and programme your movements. Lets face it how far ahead do you need to be able to see if you are walking down a flight of stairs? One stair?

SCAN
You need to get skilful at using your focus. You need to see where you are going or have a general idea, you need to see other skiers, see hazards, see the snow directly in front of you, the lumps and bumps, ice, slush, fresh snow and hollows. Your eyes are incredibly valuable and you need to get really good at using them. Most beginners on their very first lesson look down at the snow in front of them. This is because they want to see the snow that they are about to ski over and spot any undulations. They are often told by their instructor ‘don’t look down’ so they get used to having their focus always far into the future believing they must only look a long way ahead. When I watch skiers to study their focus I see many skiers with their focus too far ahead. Some appear to be looking at the other side of the valley which is about as much use as a chocolate fireguard. My advice; look down, look ahead, look to the sides, look back down, look ahead, look to the sides. Use your eyes to scan everything that will be useful to your performance. Only by seeing it can your subconscious react to it.

To get a good idea of using your focus appropriately here are a couple of experiments to try. The next time you go camping and go outside at night with a torch and walk across rough ground. Observe how you use your torch. You certainly would not keep it shining 100m into the distance. You would last about 2 seconds before tripping over. You use the torch to scan. You need to know where you are going plus what is directly in front of you, your next step. Imagine stepping into an abyss you did not see. The next time you walk out of a restaurant observe how you use your focus. You’ll firstly look at where you are going to go, the exit. You’ll then scan the immediate future, chairs, tables, anything on the floor, spilt drinks, steps, customers legs sticking out. If you really want to see how scary focussing too far into the future is when negotiating tricky terrain look at only the exit door and try to manoeuvre yourself through the restaurant. I do not recommend it.

HOW MUCH CAN YOU SEE?
You’ll be surprised at just how much you can see in bad visibility when you really put your mind to it bringing your focus much closer to the immediate future to what we call the ‘now’ moment. People either give up far to easily and throw in the towel or are looking too far into the distance and only seeing white cloud. Lets face it, if you look into white cloud that’s what you’ll see. It’s very rare to see nothing. How much can you see at dusk? How much can you see in the middle of the night with a little moonlight? Look and ye will find. Get used to using your focus appropriately and skilfully and skiing in bad visibility will take on a whole new dimension. It’s a ‘game changer’.

All Snoworks Ski Courses cover how to ski well in bad visibility. Click for the full listing of Snoworks courses.