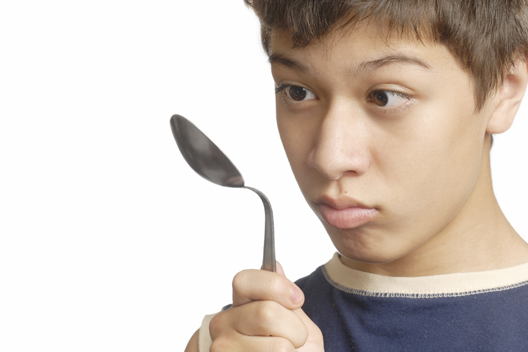 There Is No Spoon

For any ‘Matrix’ fans out there you’ll immediately recognise the above quote. The quote is from a young boy early in the film when Neo enters the Matrix. The boy is holding a metal spoon, then the spoon bends in front of him to Neo’s surprise.

The boy responds. “Do not try to bend the spoon — that’s impossible. Instead, only try to realize the truth: there is no spoon”

For those who have not seen the Matrix then this will seem like utter nonsense! So a bit about the film – The film is about a future where reality perceived by humans is actually a computer generated world created by machines to pacify and subdue the human population, while their bodies (held in a state of deep sleep) generate electrical activity to be used as an energy source by the machines. Some humans have escaped the machines and are set on freeing the human population from the ‘dream world’ created by the machines and into reality. The human ‘rebels’ are able to enter the computer dream world  with the aim of freeing the humans. As the rebels understand the rules of the computer generated dream world they are able to use the rules to empower themselves to achieve the most amazing feats whilst inside the computer generated world.

So back to the “There is no spoon” quote and it’s relevance to this blog. I like to think that if you know the rules of skiing then anything goes (well almost anything). My quote I use to empower skiers is “There is no slope”.

So what exactly does this mean and how can it empower you to greater skiing performance than you’ve ever imagined. Firstly you need to understand the relationship between you, your skis, the snow and the mountain. All your control comes from the relationship between the two surfaces in contact with each other. In our case as skiers, the ski edges and the snow. In racket sports, the strings and the ball. In golf, the club head and the golf ball. In motor sports the rubber of the tyres and the surface of the road or track.

Once you understand that the control comes from the relationship between the two surfaces you will then realise that this never changes. Your ski edges are the same and the snow is the same (more of this later on). So if you can ski a blue run in control then what changes?

Imagine if your blue run is suddenly tilted to a greater angle (say the equivalent of a red run). Your ski edges have not changed and the snow that you’re skiing on has not changed. So what has changed? Just the effect of a steeper slope on your mind. If the same slope (your blue run) is then tilted to an even greater angle (say the equivalent of a black run) then what has changed? Not your ski edges and not the snow. Just the effects of the greater angle on your mind. This scenario can keep going. The same slope being tilted at a greater and greater angle. The only limit being where the slope angle becomes impossible to ski.

Lets take this another step further. Imagine again this same blue run that you can ski in control (your blue run) and this time instead of someone lifting the same slope to create a greater slope angle imagine someone has got underneath the slope and pushed up from below to create bumps. The snow is still exactly the same snow as before and your ski edges certainly have not changed. So again what has changed? Just the effects of the new shape of the slope (the bumps) on your mind. Once again you need to ‘flatten the slope’ and again it’s what all the great skiers are able to do. This scenario can go on and on with someone pushing up from below to change the shape of your ‘blue run’. The more the shape of your blue run changes the more the effect this has on your mind. Just remember it’s the same snow and the same edges. The more ‘your blue run’ changes in shape and steepness the greater interference this has on your mind. Are you able to ignore all the interference coming your way and create a reality where all that matters is the relationship between your ski edges and the snow? This may again seem ridiculous but it’s what we do. We are able to flatten the slope in our minds. A mogul run is not a mogul run. It’s just snow and edges.

So there you have it. “There is no slope”. – seems rediculous? Try it. The next time you go out see if you can block out all interference and just concentrate on the snow and your edges and see what you are able to achieve. Maybe the matrix is not as far fetched as we believed!

Snoworks specialises in creating a scenario where the main focus is the relationship beteen your ski edges and your contact point with the mountain. For more information on this see the following blogs:

The Proof Is In The Pudding

So You Want To Improve Your All-Mountain Skiing