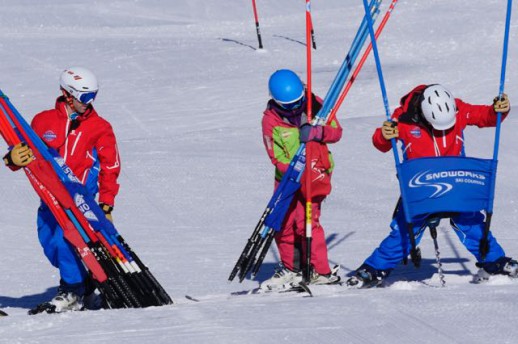 Phil Smith, director of Snoworks Race Camps explains a few of the key philosophies and benefits when race training with Snoworks.

WHY SNOWORKS? OPEN SKILLS FOR AN OPEN ENVIRONMENT
Developing open skills for the open environment is at the forefront of all Snoworks training.

What are Open and Closed sports?
Open and closed sport differ in the way they are performed and the way they are coached.
Closed sports are where the environment is constant. Therefore there is a consistency about the performance. Performance tends to be pre-planned and repetitive. Figure skating, swimming in lanes, high diving and gymnastics are examples.
Open sports are where the environment is constantly changing. Therefore the performance is also constantly changing. Performance tends to be spontaneous and variable. Rugby, football, surfing and white water canoeing are examples.

WHY SNOWORKS? MEASURED VERSUS JUDGED PERFORMANCE
Another key philosophy at Snoworks is how performance is evaluated. In sport, performance can be judged or measured. Examples of judged sports are figure skating, high diving, gymnastics and freestyle skiing. Examples of measured sports are running, jumping, weight lifting and of course ski racing.

Judged sports rely on someone watching and giving their opinion on the performance. This opinion can often be very valid but as we all know judges can also vary with their opinions. Judges can also sometimes get it wrong. Look at some great performers that have completely gone against traditional thinking and re-defined their own sport. Performances that may have been judged to be incorrect at the time. Dick Fosbury in the high jump is a classic example. Whilst everyone else was going over the high jump bar forwards or sideways, Fosbury went over it backwards and in one go re-defined his sport completely.

Ski racing is littered with athletes re-defining their sport and taking it to a completely new level. Alberta Tomba used both skis where his fellow competitors were using one. Bode Miller used flair, creativity and individuality whilst other racers were trying to conform. Ted Ligety took edge angles and stivoting to a new level and won races by some of the biggest winning margins ever recorded.

WHY SNOWORKS? CONNECTING WITH THE MOUNTAIN
Connecting with the mountain is about the relationship between you and the mountain. It’s about what we call the connection point. In golf it’s the club head and the ball. In tennis, the racket strings and the ball. In Formula 1, the tarmac and the rubber tyres and in ski racing it’s the edges and the snow.

Top athletes have developed their awareness of the relationship between the two connecting surfaces and the ability to control this relationship to extremely high levels. Having an extremely high awareness of the connection point and the ability to control and adjust this relationship allows athletes to break traditional rules and go beyond traditional thinking. Skis edges can be doing one thing whilst the body does another. Take Bode MIller as an extreme example of this in skiing along with Michael Johnson in running. Their feet are doing what it takes but the body is doing completely different stuff often denying traditional thinking. For many athletes the focus is not on the connection point it’s elsewhere. In skiing, it may be on the upper body as an example, trying to create some kind of movement pattern or focussing too far into the future or too far on the past or on some technical aspect of performance. Having a focus away from the connection point could be a good thing when working in a fairly closed environment and developing some aspect of performance but in an open environment where everything is changing all the time and performance needs to be spontaneous and variable, focusing on the connection point can be paramount.

Rock climbing is the classic example of athletes developing great connection skills. In fact it is vital. Every hand hold, every foot hold has to be carefully orchestrated and adapted to the shape of the rock face. Every hand hold and foot hold is unique, a one off, never repeated again. Rock climbers will soon know when their connection point is not good, they fall off the rock face. In skiing this is the equivalent of catching an edge or an unplanned skid.
Watch ‘Connecting With The Mountain’ video
Read ‘It Takes Two To Tango’
Photo: A Snoworks Eurotester developing good connection skills

WHY SNOWORKS? SKIING IN THE NOW
We call it skiing in the now. An awareness of what is happening to you now as you are doing it. Many racers are not operating in the ‘now’ moment preferring to have their focus well into the future to anticipate events or well into the past on what has happened. Judging things before they happen and analysing then when they have happened. This leaves very little focus to to deal with the ‘now’ moment which is critical in an open environment. Read more about performing in the now
Photo: A Snoworks Eurotester in the ‘now’ moment.

WHY SNOWORKS” SKIING IN THE LAND OF ‘ING’
The land of ‘ing’ is where all ski racers begin as children but unfortunately along the way can get lost, distracted or may even lose their way from the land of ‘ing’ completely on arriving at adulthood. You see in the land of ‘ing’ everything is a doing activity. Skiing, sliding, edging, twisting, recovering, balancing, reacting, experimenting, trying, failing, losing, winning. Words finishing with ‘ing’ are verbs and verbs are about doing things. Ski racing is about doing things, it’s not about trying to achieve a perfect technique or replicate a perfect movement pattern as this will only work in a closed environment which is not ski racing at all. In the land of ‘ing’ everything is changing all the time so the racer needs to be changing all the time. Unfortunately adults can lack the patience to live in the land of ‘ing’ where improvement happens naturally over time. In our hurry to improve we want answers quickly and this lack of patience can create robotic movement patterns where performance is not natural and not related to the changing open environment. Read more about skiing in the land of ‘ing’.

WHY SNOWORKS? THE PERFORMANCE THREADS
In all sport there are four factors that affect performance. We call these factors the ‘Performance Threads’.

Different sports require a difference emphasise on the ‘Performance Threads’. Some sports are predominantly physical, some sports are much less physical and more psychological, tactical or technical. Ski racing pretty much needs an equal balance of development across all four threads. By developing all four ‘Performance Threads’ we can help each athlete to develop their full potential. Many athletes are predominantly working on developing only one or two of the Performance Threads and thus missing out on so much untapped potential. By making sure each thread is developed equally we can maximise potential. Read ‘Are You Developing Only 23% Of Your Potential’