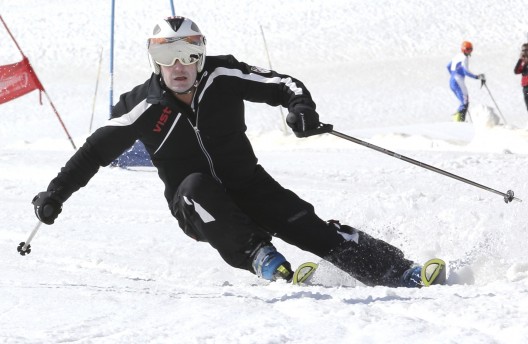 It’s the most talked about thing in skiing, ‘sidecut radius’ but what is it and how can you use it?

Sidecut radius is the shape of the ski. Wide at the tip, narrow in the middle and wide at the tail. Put it flat on the ground, draw around the edge and the curve will give you a part of a circle – The ‘Sidecut Radius’.

So next comes the fun bit – ski down the mountain stick the ski on its edge and hey presto the ski takes you around a curve. Wow, how easy is that, it’s like cranking over a Ducati Desmosedici RR. Get it right, the edges bite and the skis accelerate leaving a mist of melted snow in your trail. Goodbye Citreon 2CV, hello Bugatti Veyron Super Sport. For those that don’t know, the Bugatti is the fastest road car ever produced with a top speed of 267mph and 0 to 60 in 2.4 seconds. Now that’s fast.

So lets get down to the nitty gritty. Carving is about skiing fast. Yep it’s an adrenalin filled roller coaster! But and it’s a big BUT summed up by the great Perelli saying – Power Is Nothing Without Control. That’s where we come in – Power harnessed with control.

First thing, it’s no good just sticking a ski on its edge and hoping for the best – you’ll end up like Denzil Wahington in Unstoppable. You need to know how to control carving, how to lose or gain speed, how to control direction. So to begin with lets go back to that sidecut radius.

The sidecut radius is just the shape of the ski, stick the ski on its edge and it creates a different curve and this curve dictates where you go, it’s called the ‘Carved Turn Radius’. So for those numberjacks amongst us here comes the formula, if you’re not into numbers just skip the next bit.

So what does this mean? It means your skis can make millions of different sized ‘carved turns’ simply by adjusting the angle of the ski against the snow. For example, a ski of a sidecut radius of 15 metres can make any size carved turn from 14 metres radius curve with a 20 degree edge angle to a 5 metre radius curve with a 70 degree edge angle and everything between.

Edge angle = the angle the ski makes with the snow.

So all you need to do is learn to adjust the edge angle and before you can say Jack Robinson you’ll have the speed of the Renault-powered RB8 Red Bull Formula 1 car and with a Snoworks Race Carve Course the control of Lewis Hamilton.

Of course if it was that easy you wouldn’t need a Snoworks Course. Rome wasn’t built in a day but you can begin your journey to adrenalin fuelled skiing.

The Race Carve Course combines high octane skiing in and out of the gates. Working on skills and drills that will give you the accuracy of Howard Hill with the mindset of Yoda.